I recently joined the Kauffman Fellowship where I will be spending considerable time over the next two years alongside other global VC investors to learn more about VC investments. I completed my first class recently alongside 40 other VC investors, and although the learning was tremendous from all around, I wanted to share my thoughts on a specific subject where I soon identified a clear distinction between the West and Middle East, and that is the involvement of universities in the VC space.

During the kick-off session of the program, it was clear that there are multiple university endowment fund managers in the class, so I was keen to learn more about existing endowment funds, and the details of their involvement in the VC space.

To help give us an insider’s look on this space, I leaned on my Kauffman fellow Joanna Rupp, the Managing Director of Private Equity for the University of Chicago’s $7.1B endowment.

Yousef Hammad: What are endowment funds?

Joanna Rupp: Financial endowments are an institution’s investment assets which are invested to provide dedicated and permanent funding to support the institution’s mission. Typically, a small portion of the endowment is paid out to support current operations, while any appreciation in excess of the payout is retained in the endowment so that it can grow and support future operations.

YH: How much do endowment funds invest in PE and VC?

JR: Below is a table highlighting how a typical Endowment fund, based on size, would allocate its assets into the VC asset class. As shown below, endowments allocate ~ 10% – 20% to PE & VC, and approximately half of that is allotted to Venture Capital investments.

YH: How do endowments invest in VC?

JR: The majority of endowment investments are made through partnerships. Smaller endowments often use a consultant to help source and vet investment managers or invest through a fund of funds. Larger endowments generally have professional investment staff who are responsible for identifying and constructing a portfolio of investments with general partners. Some endowments may invest directly in entrepreneur-backed companies, or co-invest with their general partners, but it is not the standard approach.

YH: Why do endowments invest in VC?

Returns:  Perhaps the most compelling reason to invest in VC is the amount of wealth that has been created and will be created in the space. Over the years, whole industries and iconic companies have grown with the backing of venture capitalists. Billions of dollars of value were created. There is no reason to think that innovation is slowing and we expect that it will continue to transform our lives – creating significant wealth for business owners. Historically these gains have accrued to early VC investors, but also public market investors. Endowments have profited from both their VC investments and public equity investments in these early stage growth securities. Arguably a public market investor in Cisco, Oracle, Google, or Apple participated in the innovation economy without the risks of VC investing.  However the market dynamic is changing. Many of these companies are staying private longer and more of the wealth creation is accruing to private investors. This had led us to increase the percentage of private investments allocated to venture. Not only do we think that wealth creation is accelerating, we cannot access many of the companies that matter through the public markets.

Ultimately, investors are seeking higher returns, as measured by IRR or multiple of capital, and diversification. Endowments are no different, returns and diversification remain the main incentive to invest in VC, and the expectation that venture may be able to deliver attractive returns is supported by historical experience, academic theory and market dynamics.

Endowments, specifically in the US, were one of the first investors in venture capital. Many endowments benefitted by providing capital to a nascent, but growing industry. As the following Table indicates, some of the best returns were realised in the industry’s early years.

Median Net IRR to LPs from inception to June 30, 2015 in US Dollars 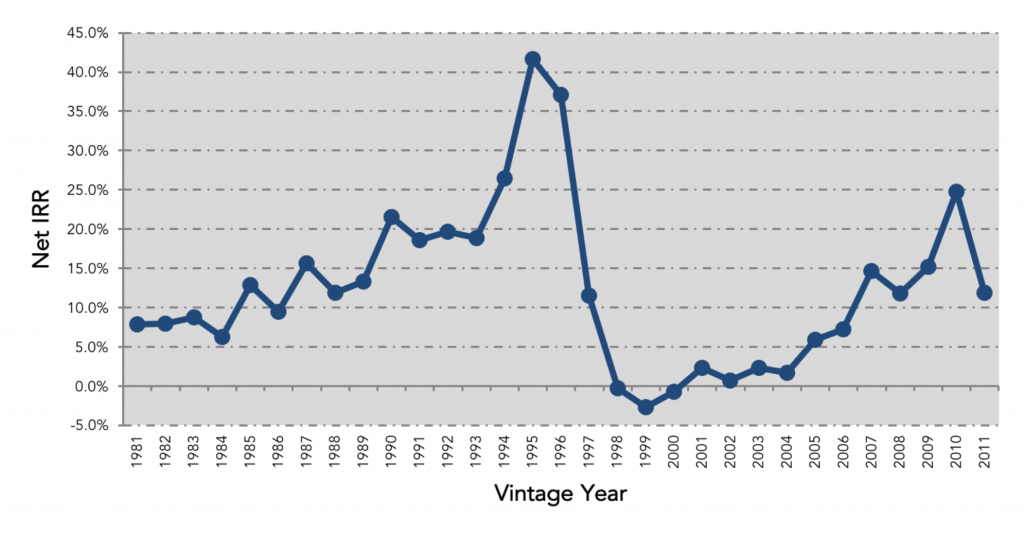 The University of Chicago made its first venture investment in 1978 and has been an active investor since.VC has been the endowment’s best performing asset class delivering a time-weighted return since inception through December 2015 greater than 20%, according to Joanna

Time horizon: The perpetual nature of endowment funds aligns with the long time horizon for private investing generally and venture investing specifically. One of the return components is an “illiquidity premium”. That is the expectation that an investor will receive a premium for locking money up in an illiquid investment and structure.  Endowments require sufficient liquidity to make a small percentage annual distribution, but outside this requirement, cash needs are minimal. So endowments are able to lock a meaningful portion of the portfolio up for many years, investing not only in VC, but real assets, buy-outs and private debt.

Diversification: Venture capital also provides some diversification benefits to an institutional portfolio. While venture is a volatile, cyclical industry, the cycles are long and not necessarily synchronous with other asset classes. The correlation of venture with other asset classes varies, but an allocation to venture should be additive to the portfolio construction.

Overview of the University Endowment Space in the Middle East 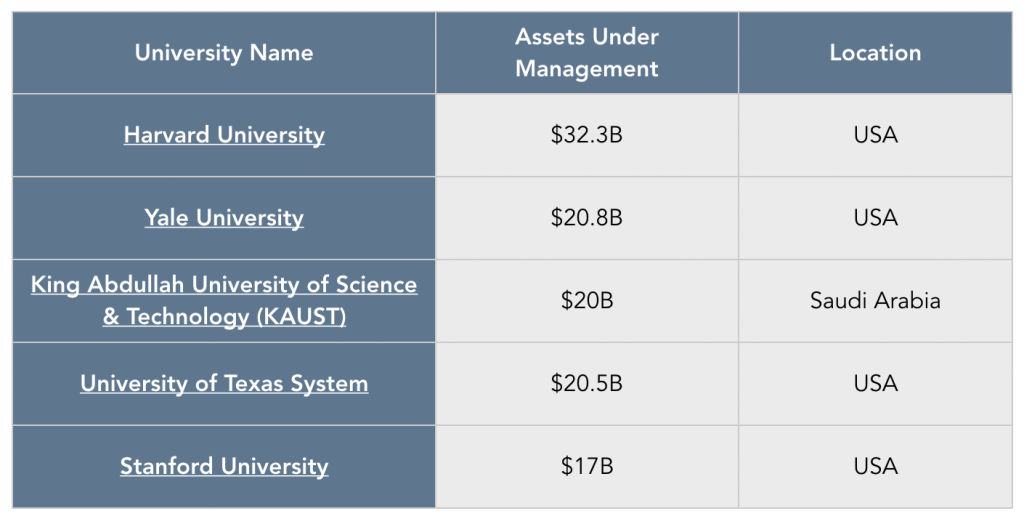 There is very limited information available on Middle East university endowments, apart from Saudi Arabia, However, most endowments in the Middle East, including the Saudi funds, are associated with mosques, religious charities and real estate investments.

This participation however is far from ideal, and here’s why: Limited Impact

The Saudi universities’ endowments (only Saudi is mentioned in this post due to a lack of any publicly known involvement of any other Middle East university endowments) have a direct impact on the VC space. They have set up and fully manage their own incubators, accelerators and investment funds. Although new VC funds are extremely needed in the region, being a direct investor/fund manager means placing a limit in bandwidth based on the number of deals one is able to execute and number of portfolio companies one can manage. This makes the involvement of the Saudi universities’ endowments in the VC space extremely small, compared to the US’s 10%-20% of allocation from the size of the endowment fund. Although I don’t have the figures on the sizes of the Saudi universities’ funds, it is far from the $3B mark (10% of known Saudi university endowments at ~ $30B).

And beyond Saudi, the view is even dimmer, with no known university endowments that are involved in the VC space, be it directly or indirectly.

My colleague Amir Farha made a Call to all Arab Investors, and here I echo his call, specifically to Arab universities. The impact these university endowments can have on the ecosystem, whilst enjoying strong ROI yields and a well-diversified portfolio, will be transformational for the region.